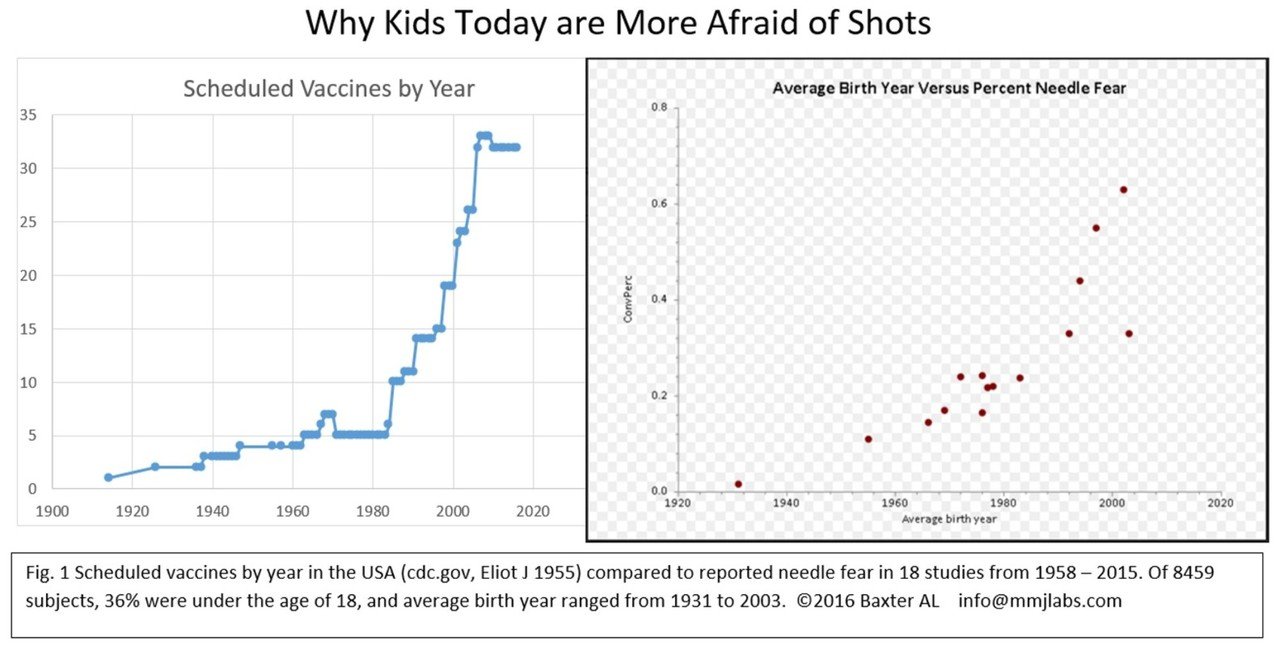 The disappointing uptake of Obamacare by millennials has been explained by several theories. Subsidies for wealthier young adults don’t cover premiums, premium hikes make paying a penalty more appealing, and of course the “young people feel immortal” explanation for blowing off the cautious choice for prevention and unexpected illness.

At the Allergy and Immunology Association meeting last week, I presented research suggesting another explanation. It’s logical and fairly well established that people who fear needles are more likely to avoid preventive healthcare. If so, fully 2/3 of “Gen Z (born 2000+) and between 20% and 60% of millennials have no intention of signing up for prevention. Frankly, they have no intention of donating blood or getting a flu shot either. Needle fear forms at age 4-5y. The rapid rise in the number of vaccines millennials and Gen Z received had an 84% correlation with a rapid rise in reported fear of needles. As these generations age, the repercussions on compliance with public health initiatives may be profound.

The first solid mention of needle fear as a barrier to healthcare was in 1995, when James Hamilton MD reviewed a number of papers and noted in the American Journal of Family Practice that needle fear was under-diagnosed, a barrier to preventive healthcare, and affected an estimated 10% of adults and 25% of kids. If you assume that “adults” were 45 at the time of his paper, and look back to a birth year of 1950, sure enough – that’s about 10% fear on the graph of published papers reporting needle fear. But in 2012 Anna Taddio PhD surveyed over 1000 kids and adults at a museum. 63% of kids and 24% of adults said they were afraid of needles. A 252% increase.

To look at how that kind of anxiety plays out in prevention, a 2012 study by Target found that 24% of adults who didn’t get a flu vaccine cited needle fear as the reason. More recently, a 2016 review found that only 29.4% of young women completed the HPV vaccine. Younger age and receipt of the flu vaccine were negatively connected with compliance. “But they took the flu vaccine”, one might say, so the theory that disliking needles falls apart. Actually, distress increases with the number of injections on the same day, so between the flu shot and the more irritating HPV, flu won. As for why younger girls were less likely to comply, a quick look at the first graph demonstrates how the number of injections has increased. Younger girls had more chance to develop a phobia earlier.

All this is to say, there is a cohort of kids called Gen Z. When they come of age to buy their health insurance and drive to the doctor, there is a real chance they won’t do either. Prediction models that ignore this trend will get the population estimates of purchasing insurance wrong every time. Without a mandate or better understanding of ways to resolve fears, there’s a whole generation that may opt out of voluntary and preventive healthcare altogether.

Tags: Healthcare Industry
Back to Blog

As a researcher, I find the best scientists are those who digest a broad spectrum of...
Read More

Who Will and Won't take the COVID Vaccine and Why? - Pain Care Labs